From Traditional Ulama to Modern Intellectuals

Al Makin, Heidelberg, Germany
Religious Affairs Minister Maftuh Basyuni recently criticized Indonesia's kyai (Muslim clerics) for their deep involvement in politics at the cost of the quality of Islamic education. The minister voiced his criticism when opening a meeting of the Islamic Boarding Schools Association (RMI) in Jakarta.
""Some Muslim clerics prefer to be involved in politics rather than becoming educators ... and as a result, religion-based education in the pesantren (Islamic boarding schools) has become somewhat disorganized,"" The Jakarta Post reported the minister as saying in its May 19 edition.
The government and political parties often use Muslim clerics for political purposes as they have big followings at the grassroots level. For the clerics, such relationships benefit them politically and, quite often, financially also.
One may venture to say that the traditional role of the kyai in setting moral standards have lately been overshadowed by their political involvement. Therefore, it is no exaggeration to say that their fatwas are often no longer divorced from political interests.
In addition, some of them have spent enormous energy in supporting certain political figures. If this involvement in the head-to-head politics continues, it will leave them with less energy to think about the development of their pesantren in facing up to competitive education in an increasingly globalized world.
Interestingly enough, the above remarks by Basyuni recall the same concerns expressed a long time ago by a former religious affairs minister under Soeharto, Munawir Sjadzali.
Sjadzali, however, was more worried about the decline in the number of ulema, and their intellectual capacity in facing up to the modern world. Therefore, he encouraged the emergence of what he referred to as ulema plus.
At the practical level, he responded, up to 1988 at least, in two ways: his pilot project setting up five special Muslim high schools, or madrasah aliyah program khusus (MAPK), and his determined efforts to send young Muslim intellectuals to study abroad. The first project has been discontinued, while the second one continued until recently.
In Munawir's vision, ulema plus referred to those clerics who were prepared, or able, to shift from performing the traditional role of a cleric to performing that of a modern intellectual, or even to combine both roles.
By doing so, Munawir broadened the meaning of ulama to include those educated in religious tradition and who have also mastered modern knowledge and science. It was expected that this type of cleric would be better capable of addressing modern problems.
The recent satirical comments by leading Indonesian novelist Ahmad Tohari are also relevant in this regard. According to Tohari, the mass migration of clerics to the political arena is also the result of the lack of modern skills possessed by the graduates of Muslim religious schools. As a result, they are unable to compete in the ""real"" sectors, such as the economy or professions. Joining, or even establishing, political parties to be a quick fix for such people as they strive to improve their financial and economic positions.
When discussing the roles played by Muslim clerics, it is also worth remembering that the meaning of the word ulama in Arabic is not restricted to those who have mastered religious knowledge, but also the secular sciences and skills.
Thus, in so far as a person provides guidance and a valuable contribution to society, he can also be categorized as an ulema.
Unfortunately, it is rarely that we come across clerics with the intellectual capacity to be included in the ulama plus category.
As regards Basyuni's criticisms, it remains to be seen what he will do to address the problem, and reduce the involvement of clerics in head-to-head politics. Hopefully, steps will be taken by his ministry to prepare a phalanx of young, educated and dedicated ulemas.
The writer is a lecturer at the Sunan Kalijaga Islamic University of Yogyakarta, and a doctoral candidate at the Seminar fuer Sprachen und Kulturen des Vorderen Orients at Heidelberg University in Germany. He can be reached at makin@stud.uni-heidelberg.de. 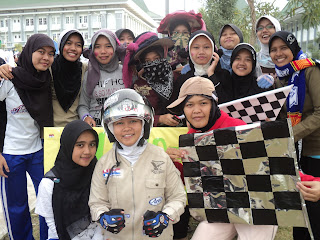 The Responsibility of Principal

Introduction
A vision for a school should encompass broad agreement about the following: the nature and purpose of education, the nature of the school’s curriculum, the working relationships within school and the way the school relates to its community. Most principals have a vision in their own minds of how they see the school developing, but this vision needs not only to be widely shared but developed and owned by the staff and governors as a group.
As institutions of higher learning involved in the education of current and future manag¬ers we are voluntarily committed to engaging in a continuous process of improvement of the following principals and their application, reporting on progress to all our stakeholders and exchanging effective practices with other academic institutions.
In this article will be explained about the responsibility of principals in managing school.

Discussion
Leaders have the main responsibility for generating and sustaining culture and communicating core values and beliefs both within the organization and to external stakeholders (Bush, 1998, p. 43). Principals have their own values and beliefs arising from many years of successful professional practice. They are also expected to embody the culture of the school or college. Schein (1997) argues that cultures spring primarily from the beliefs, values and assumptions of founders of organizations. However, it should be noted that cultural change is difficult and problematic. Hargreaves (1999) claims that most people’s beliefs, attitudes and values are far more resistant to change than leaders typically allow .
One factor contributing to the principal’s different vision is the responsibility for thinking about the future. Alexander (1992:149) found that the more successful principals were those who remained in close touch with classroom realities and teachers everyday concerns, who valued and developed individual staff potential and encouraged collective decision making. Playing a part in the actual teaching provides a good way of remaining in close touch with classroom realities. At the same time principals must leave enough time for other aspects of their work, for keeping in touch with what individual teachers are doing and providing the necessary support and encouragement for development work, careful evaluation of what is happening in the school, as well as maintaining a well organized approach to their administrative work .
Whitaker (1993:73) defines leadership as behavior that enables and assists others to achieve planned goals. It is dynamic and future oriented, concerned with improvement, development and excellence. He points out that leadership can occur at all levels in the school and it is important that others in the school share the leadership functions of the principle. Leadership involves inspiring others, supporting and helping them, helping them to analyze and solve problems, encouraging them and creating a situation of trust in which people feel they can safely try out new approaches. It also involves being critical in a supportive way where this is needed and taking a firm line when necessary. Examination of relevant literature indicates that the major approaches to principal assessment are based on the following aspects: (1) results (outcome based); (2) standards-based; (3) personal qualities; (4) role-based; (5) key behaviors of successful principals (6) principal efficiency; and (7) subordinates’ satisfaction .
The principal has a key role in leading change. He or she may be the change agent or may be implementing changes suggested by someone else or required by law. On many occasions it will be the task of the head to start people thinking about the possibility of change. The principal can also help to develop a climate in the school in which there is an interest in development, and some change is a normal part of the way the school operates. He or she must seek out the best starting points, spend time talking with teachers about the best way of proceeding, coordinate the plans for change, see that there is appropriate staff development activity and that the changes, when implemented, are monitored, followed up and maintained. Principals need to be conscious of the fact that it is tempting when first appointed to want to make changes too quickly. It is also easy when the initial changes are made successfully and the school is running on an even keel to feel that further changes are not needed. Even if external demands for change allow this, the developing school should be continually looking for ways to develop further.
A major problem for coordinators and for principals is the lack of time for the work. Primary schools are normally staffed on the basis of a full time teaching program for all teachers and it is difficult for a coordinator to observe or support the work of others if he or she has no time free during working hours to do this. Some principal provide an opportunity by taking over classes themselves and freeing a coordinator. Occasionally it may be possible, if finance is not too tight, to employ a supply teacher for half a day to free a teacher to support others. Classes may be put together to watch a television program with one teacher while the other fulfils his or her role as a coordinator. There may also be opportunities when students are in the school.
The principals should not be the only leader in the school. The deputy has an important role and there is also a place for leadership from coordinators and from any teacher who has something particular to offer. In a small school everyone is likely to be in a leadership role for some area of work. The opportunities and training the principle offers to other leaders in the school are crucial to their effective working. They should be acknowledged as leaders and enjoy sufficient delegated authority to be able to lead, other teachers must be encouraged to welcome advice. They may also need training in aspects of leadership, such as leading discussion, chairing meetings, observing other people teaching in a way that does not appear to be threatening, evaluating aspects of the work of the school, and so on. They may need help in encouraging colleagues to try new ways of working.

Conclusion
Leaders have the main responsibility for generating and sustaining culture and communicating core values and beliefs both within the organization and to external stakeholders. Principals have their own values and beliefs arising from many years of successful professional practice. They are also expected to embody the culture of the school or college. A major problem for coordinators and for principals is the lack of time for the work so the principals should not be the only leader in the school but also the deputy has an important role and there is also a place for leadership from coordinators and from any teacher who has something particular to offer.

A good student has two characteristics. First of all, they should prepare the subject before they come in the class. They will be easy to understand the subject that is given by their teacher if they prepare the subject. Therefore, they need to read a lot from many references and practice their knowledge in their daily life.
Another important factor is discipline. The responsibility of student not only come in the class to hear their teacher’s explanation but also they have to do their duty on time, they shall not often be absent in the class, and keep their motivation to study not only for examination but also every time.
In conclusion, students are respected not only for their capability but also for their responsibility to study.